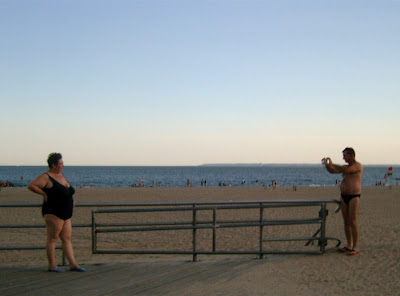 this photo is BEYOND good!

ha. thanks buddy. when i first rode by she was taking his photo. i shy away from exploiting foreigners but this was too golden. by the time i turned around and went back they had moved on to her portrait. the best part was her sister, who was not in a bikini, along for the ride & glaring at their romantic bliss. too awkward to really take the photos needed to capture the moment. i need more courage and to realize i'll never see these people again. as long as i get a photo with them not looking at me i'm set. doesn't matter if you get hollered at in the end.

I have that exact same problem.... I see the raddest shit, and then bail on taking a photo of it on the off-chance I get shouted at.

So good. I've been trying to overcome taking photos of people too--I've been doing this little photo blog journal with a friend of mine in AZ and he wants me to take photos of strangers, probably mostly freaks in SF. I can barely take photos of people I know let alone randoms. So far, I've gotten as far as musicians in BART stations. for me it's a fear of exposing myself to people and coming off as an asshole taking a photo. I think too much.